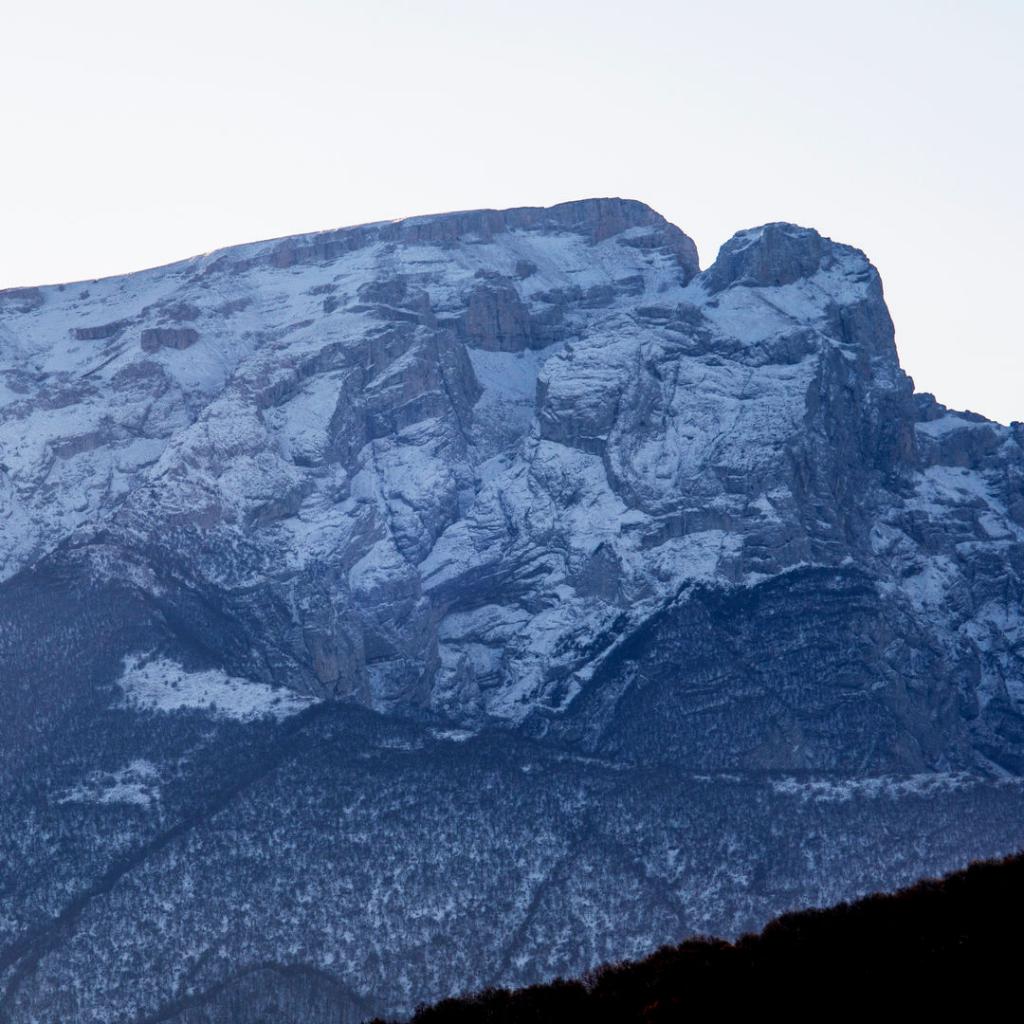 A mountain in the North Caucasus (in Ossetian called Madykhokh). The border of the Dzheyrakhsky region of Ingushetia with the Prigorodny region of North Ossetia runs along the ridge of the mountain. The height of the mountain is 2993.3 m. It is a Table Mountain - vertical steep slopes and a flat top resembling a table. The mountain delights with its unique natural beauty and grandeur. There are many hiking trails of varying difficulty on the slopes of the mountain. During the walk, you can see many rare endemic plants.

Table Mountain has long been a natural background for one of the notable city attractions – the Sunni Mosque – which stands on the left bank of the Terek River. This view - an elegant building against the background of a mighty mountain - was a real landmark of Vladikavkaz city, until a multi-storey building was built behind the mosque, which killed the perspective.

The object of a territorial dispute. It all started when a message appeared on Instagram on the Vladikavkaz News page about the upcoming ascent of the inhabitants of North Ossetia to the mountain, which is located on the border of the republics. In order to develop tourism and popularize active recreation, the committees for youth and tourism, tourist clubs and rescuers of North Ossetia invited the residents of the region to climb the mountain. The publication aroused the outrage of some residents of Ingushetia. The organizers of the ascent began to receive threats. This was announced by the Telegram-channel Ossetia. In order not to allow them to “stake out the mountain for themselves,” some residents of Ingushetia urged young people in Ingushetia to climb the mountain themselves at the same time when the neighbors would do it. The Ingush authorities have commented on the situation. On the website of the Ministry of Foreign Relations, National Policy, Press and Information of the republic, citizens were asked not to quarrel. The leadership of the republics will figure out what was the reason for organizing the ascent. At the same time, people should not succumb to provocations. The ministry put forward a new initiative: let everyone climb the mountain. Citizens of Russia and foreigners were invited to the ascent, regardless of nationality and religious beliefs. The Telegram-channel Glavkom RI added that it was still not clear on whose territory Table Mountain was located. The Ingush believe that according to the documents it is located in their republic. Ossetians object and say that according to the federal cadastral service, most of the mountain is located in North Ossetia. At the same time, the inhabitants of Ingushetia revere the mountain as a particularly valuable cultural object, there is an ancient sanctuary of the pagan deity Myat-Seli, and the top of the mountain is depicted on the republic's coat of arms.

Legend of the origin of Table Mountain

In ancient times, a certain people lived in the area in front of Table Mountain. A dragon lived in a cave deep in Table Mountain that annually took tribute from the inhabitants – a sixteen-year-old girl, whom he carried away and ate in his cave. By the next tribute collection date, the local prince hid his sixteen-year-old beautiful daughter in the tower. On the tragic day, the parents took their daughters to the place where they met the dragon. The princess, knowing the secret of the dragon's death, disguised herself as a servant, and hiding in the crowd, at a fateful moment, rushed into his mouth herself. There was a terrible roar, the dragon was burnt, and the princess was dead on the top of the mountain. She lies, as if on her deathbed, with her hair flowing down towards the Terek River, which rushes along the bottom of the Darial Gorge. Hearing the noise, a young man named Kazbek saw the lying dead princess from the top of another mountain. Blinded by the beauty of the girl, he prayed and asked God to turn him into a mountain, but higher than the one on which his beloved rested, so that he could forever admire her from above. God heeded his prayer and fulfilled his desire.

A gentle breeze lazily drove flocks of white clouds across the blue sky.
Under the Pont Alexandre III, the beautiful Seine was solemnly and unhurriedly carrying its waters.
The smell of roasted chestnuts from Les Invalides side tickled my nostrils pleasantly.
Somewhere nearby, Joe Dassin sang Et si tu n'existais pas in a pleasant baritone.
The river tram Navette Batobus, passing under the bridge, carried tourists from the Jardin des plantes to the Eiffel Tower.
-С'est la Tour Еiffel! С'est la Tour Еiffel, - the guide shouted twice, pointing towards the high openwork structure.
The tourists perked up and began to click the camera shutters.
No one dared to miss such a beautiful view.
The dozing river gull sitting on the railing of the bridge woke up from enthusiastic cries and, flapping its wings, rushed towards the tower.
Where else can you see such a beauty that millions of people from all over the world come every day to look at.

***
Once upon a time, at the very foot of the Caucasus Mountains, smart people decided to build a city.
The warm climate, proximity to the river and incredible views of the blue mountains in the distance were the main reasons for this decision.
All the bridges built across the bed of the turbulent mountain river opened up a wonderful panorama, which could not be repeated by any city in the North Caucasus and in the Transcaucasia as a whole.
Thanks to the mild climate and inexpensive life, Vladikavkaz became a favorite city to live in for the retired Russian military men of various ranks, up to generals, who settled in large numbers on both banks of the Terek. One of the city streets was even once called Generalskaya.
Well-known Russian architects considered it an honor to build their quaint mansions with intricate openwork laces of high-quality red brick in the capital of the Tersk Region.
Vladikavkaz was distinctive and recognizable.
Postcards with magnificent views of the city were sent all over the world.
Travelers stayed in numerous hotels so as to get up early in the morning to admire the unique panorama of the majestic chain of blue Caucasus mountains opening from the Strelka.
- Gentlemen, look how beautiful the Kazbek looks from this point! What a fluffy white hat it has!
-Madam, what a miracle this Table Mountain is and how beautiful the Mosque looks against its background! Don't you think so?!
-Yes, yes! You're right! I will definitely share these views and experiences with my friends and neighbors and recommend le voyage to this chic corner of the earth!

***
Our ancestors left us the old Vladikavkaz in the hope that we will preserve it and will not let the identity inherent in it disappear – the identity that no one dared to destroy.
What will we leave to our children?
The new Eiffel Tower?
Eh ...