Exhibition Hall
of the National Museum 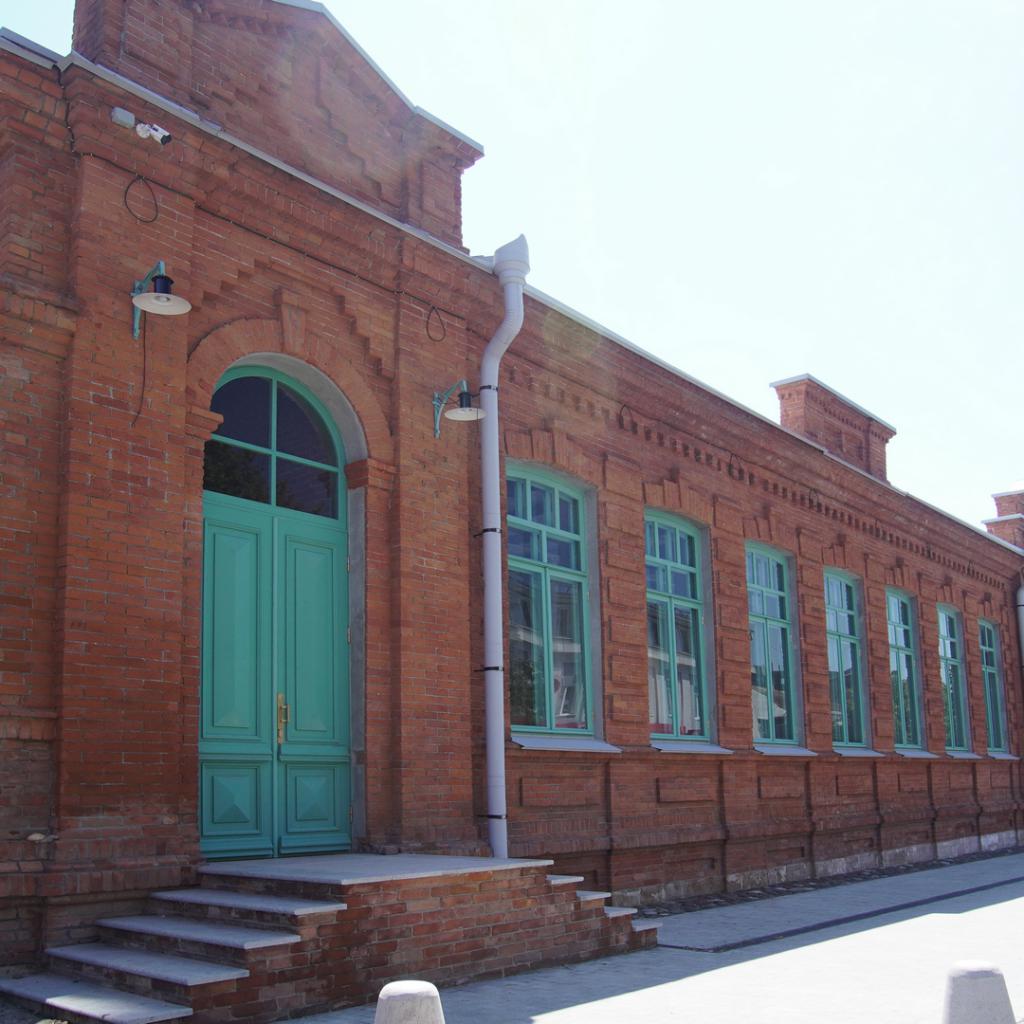 B.S. Vakhtangov’s Tobacco Factory, Exhibition Hall of the National Museum of the Republic

The corner of Gorky Street and Prospect Mira was occupied by the buildings of a tobacco factory, which belonged to a well-known Vladikavkaz businessman – merchant of the Second Guild Bagration Sergeevich Vakhtangov, father of the famous theater director Yevgeny Vakhtangov.

B. S. Vakhtangov had considerable social influence, was elected a member of the town council of the Vladikavkaz City Duma four times, actively participated in the life of the Armenian diaspora in Vladikavkaz. In September 1898, a parochial school was opened at the Armenian-Gregorian Church in Vladikavkaz, and 1 year later, on August 7, 1899, the Armenian charitable society chose B. S. Vakhtangov its honorary guardian for three years". In honor of the anniversary of the school opening, B. S. Vakhtangov "donated 50 boxes of chocolates for giving to students." From the memoirs and some facts of his son's biography, a portrait of his father is known, who was distinguished by "severe quarrelsomeness and despotism." The manufacturer B.S. Vakhtangov, “a dry, domineering, hot-tempered man, was completely absorbed in caring about his business. He started with a penny, gradually, step by step, achieved a relatively lasting commercial prosperity." B.S.Vakhtangov founded his tobacco production in 1869 and only twenty years later, at the turn of the 1880s and 1890s, he managed to consolidate his success with awards at trade and industrial exhibitions in Russia, Persia, and France. The products of B. S. Vakhtangov's factory were exhibited at world exhibitions, had a large collection of gold and silver medals, honorary reviews. “By 1914 B. S. Vakhtangov's tobacco factory referred to the category of commercial and industrial establishments of the Terek region with a turnover of at least 20 thousand rubles. B.S. Vakhtangov was awarded one silver and four gold medals "For Zeal" for his economic activity, and in 1911 he received the title of hereditary honorary citizen. In The Terek Calendar for 1915 the list of the largest enterprises in Vladikavkaz includes: under No. 73 - B. S. Vakhtangov's Tobacco Factory on Evdokimovskaya Street (85 workers); under No. 74 - his own Trade in tobacco products on Aleksandrovsky Prospect (number of workers - 2 people).” (alania.gov.ru website)

Only two buildings from the complex of premises of the tobacco factory built in 1903 have survived - the former production building and the finished product warehouse. The author of the architectural project is unknown. The buildings are decorated in a typical early XX century eclectic style with elements of Art Nouveau and pseudo-Gothic. This combination, together with unplastered brickwork ("brick style"), was especially popular in industrial architecture. In the Soviet period, the industrial and warehouse buildings that have survived to this day housed the Integrated Plant (since 1925), the manufacturing and shoe shops of the Integrated Plant of National Products (1950-1960s), a shoe factory (1969-1988), the Garment Factory Club (1964-1983).

At present, the production department of the Vakhtangov factory has been turned into an exhibition hall of the National Museum of the Republic.

My grandfather called this long brick building right in front of our windows "a cigarette factory" and always hummed out of tune: "on the deck the sailors were smoking cigarettes ..."

As for the "factory" it was more or less clear to me. A factory is a place where workers work, that is, not workers, but the proletariat. They told us about this in the kindergarten twice a year - in autumn and in spring. I was a little embarrassed by the absence of smoking chimneys, such as in the picture in the book, which, in my opinion, was an important attribute of a factory. With a "cigarette" it was, sort of clear, too. At the age of eight, only the word paper was associated with the word "cigarette", well, so colorful and rustling, in which, like in a candy wrapper, plasticine blocks were wrapped, so as to hang them on the New Year tree later imitating chocolate bars. Well, it also pliantly lay down on any surface to be pasted, and, finally, the loosest confetti were chopped from it with a hole punch. This cigarette paper was a very pleasant and necessary thing in the household.

At this where something began to go wrong. Well, this weightless multi-colored beauty cannot be made in such a gloomy, really frightening place. Here I need to say a few descriptive words about this very cigarette factory. It made the most depressing impression on me. A long one-story building with frequent windows, always unwashed, which made the building look abandoned, having a single door. I had never seen anyone entering it, however, I knew for sure – the proof of this was the light of the electric lighting in the evening – that someone still was inside. This fact not only failed to calm me down, but on the contrary, multiplied my fear. Who are these unfortunate people who had to hang around in this damn cigarette factory all day and night!? Are they people or ghosts, are they as transparent as the cigarette paper they are were busy making!

It didn't matter whether it was raining outside, whether the snow was sparkling on the branches of our old acacia, or its branches were covered with openwork green lace – the factory looked gloomy and uninhabited. But this was not the only thing that caused fear in me. Imagine: in the morning, you are carelessly lying in bed watching through your barely closed eyelids the dust particles curling chaotically in the oblique ray of the sun. Firstly, Saturday, and secondly, the first day of summer vacation. Of course, you still have to run to school for a summer reading list, but that doesn't count. Ask me: what is happiness? My answer is: lying in bed on the first morning of vacation with a spot of the sun on your face and with 92 days of summer vacations ahead. For 92 days you are alone with the summer. So, what, I ask what can darken such a morning? Where does the anxiety, sitting in the throat like a lump, come from? Here it is – the inevitable – inevitable, like September 1 – sound.

It comes abruptly from a low uterine register, rolls in, howling like a siren or a blue whale languishing from terrible pain, - unusually loud on a quiet summer street – reaches a special height, and sounds tense until the evening. This was the moment when I closed my eyes and stopped breathing. Sometimes, in the bustle of the day and the noise of the street, I stopped hearing it, sometimes it followed me all day long not allowing me to distract from the feeling of anxiety. And this was so day after day.

At some point, the factory turned into a curse for me. I avoided walking on the factory side of the street. I ran with a can to the barrel of kvass, which, as ill luck would have it, was installed right at the entrance to the unfortunate building, only if thirsty people were crowding around it.

For a long time, I managed not to draw attention to my shameful phobia, and it was not part of my plans to confess my irrational fear to my parents. I was not the kind of person that...

As it often happens in childhood, the end came in the most unexpected way. In the 3rd grade, a girl with the beautiful name Gayane came to us. She lived nearby, which allowed us to quickly become friends. Once she offered to drop in on her mother’s work. Where would I think? To the factory!

- What’s your mother’s position at the factory? I asked her.

- Director, - Gayane answered to me.

The heavy door on a tight spring heavily gives in to the efforts of two little girls. The smell of leatherette and rubber glue fills the nostrils. In a long room under the electric light, we see the Andes of leatherette scraps and the Greater Caucasian Ridge of what is made from this leatherette - slippers. Ugly, awkward, glued to someone's inhuman feet. Behind a few machines, the proletariat, that is, the workers of the shoe factory, are completing the plan. And Gayane's mother, Aunt Tamara, tenderly stretching out her hands to us.

I don't remember anything further.

Liliya Galazova.
Employee of the North-Caucasus Branch
of the State Museum of Fine Arts
named after A.S. Pushkin