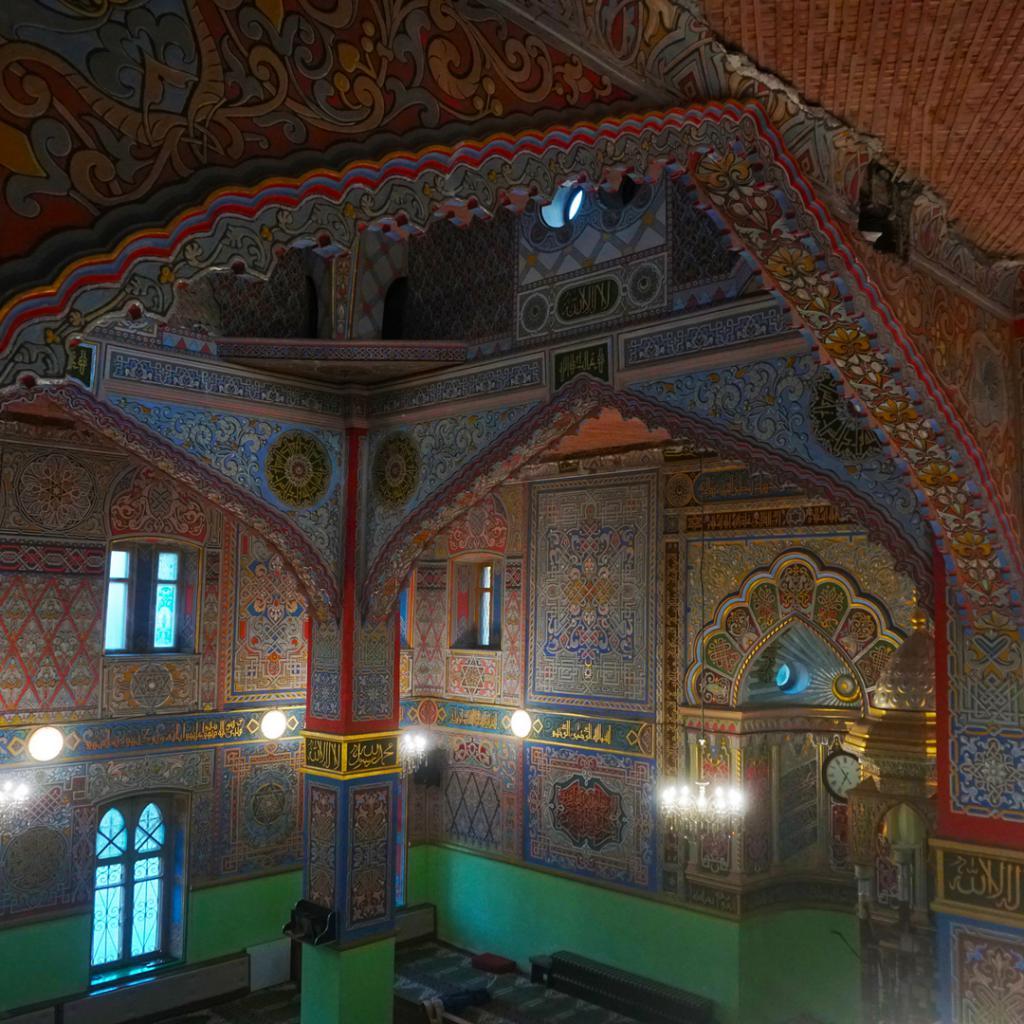 The Muslim temple on the left bank of the Terek is a gift from the wealthy Baku oil industrialist Murtuza Mukhtarov to his beloved wife Liza Tuganova, who was an Ossetian. At least, this is the version of historians and regional ethnographers.

The first stone of the future mosque was laid in 1902. By that time, the multinational and multi-confessional Vladikavkaz already had a church, many Orthodox and Catholic churches, and a Shiite mosque. Sunni Muslims - mainly Azeri merchants, Tatars who served in Ossetia and some of the Ossetians - also wanted to have their own prayer house. They turned to the city administration to give them a place to build it. It took a long time to choose the place. There was no running water - the mosque had to stand near the water so that the parishioners had the opportunity to go to the river to wash before prayer. Therefore, they decided to build it near the river bank. The banks at that time were not landscaped. Basically, baths and mills were built near the Terek river. A suitable area was finally found and construction began. But the collected money was not enough, and the Muslims of Ossetia decided to turn to the well-known philanthropist, oil industrialist - Azerbaijani Murtaz Mukhtarov. When his business ties brought him from Azerbaijan to the North Caucasus, he was already the owner of a solid capital. Murtuza also managed to achieve another goal - to marry the daughter of General Khambi Tuganov. The oil industrialist fell in love with the Ossetian Lisa the moment he saw her. And he managed to win over the girl's father, although in the noble family of the Tuganovs it was customary to be related only with the families of equal origin. It was in honor of Liza that Murtuza donated the lion's share of the funds required for the construction of a mosque in Vladikavkaz. In total, the mosque cost 80 thousand rubles, 50 thousand of which were Mukhtarov's funds.

Murtuza found the Polish architect Joseph Ploshko. He did not disappoint Mukhtarov's expectations and did his job well. He was so good that later Mukhtarov entrusted him with the construction of his own house in the Gothic style in Baku. The Sunni Mosque is one of the most beautiful buildings in Russia. From an architectural point of view, it is brilliantly stage-managed. The structure does not suppress with its scale, and this is its advantage. A very advantageous location of the mosque adds uniqueness to it. This view has deservedly become a postcard. And, of course, the composition itself and the proportional structure are unique. The best masters of their craft took part in the construction of the cult object. The artist Franz Dolejal was invited to paint the building and create the interior. For two years, craftsmen painstakingly filled the space of the mosque with sacred symbols. Stained-glass windows of rare beauty, walls painted with sayings from the Koran and ornaments make the prayer house look like a precious box. The interior decoration was made using sgraffito technique, which was progressive for that time. Layers of multi-layer colored plaster were removed by the master sequentially until the desired color appeared. This artistic and decorative technique favorably emphasized the sophistication of the interior decoration. Joseph Ploshko had no experience in building religious sites before the Sunni Mosque construction. Experts argue: what style is the building made in? Some believe that the Mukhtarov Mosque is similar to those in Cairo, others argue that Ploshko used only some architectural elements of the Egyptian style and created a unique creation. The six-pointed star also causes considerable controversy - this symbol is found in the decoration of the building. According to one version, the signs appeared after restoration in the 60s: supposedly, there were Jews among the workers. But early photographs refute this assumption. The servants of the Muslim shrine themselves are not surprised by the presence of a six-pointed star and explain that this ancient symbol is found in different cultures. For the Jews, this is the star of David, for the Muslims, the star of Suleiman. Some unusual features were also added by a breakwater on the banks of the raging Terek, erected in the form of a fortress wall in front of the mosque. It restrained the wild river and did not allow the building to be washed away. At present only the upper part of it is left, the lower part was concreted during the bank protection works. Pyramidal poplars grew in front of the mosque, and small houses were located around. They did not compete with the building, did not press with height, which favorably emphasized the beauty of the mosque. When in the 70s the construction of the Vladikavkaz hotel began on the banks of the Terek, the trees were cut down - and the mosque became visible from all sides. The hotel made the mosque a popular place among visitors - many guests were photographed against its background. This is how the mosque became the hallmark of the mainly Orthodox city.

The construction of the Sunni Mosque was almost completed by January 1905. The service was conducted in Arabic, the sermon was read in Tatar. The entrance to the mosque has always been open to believers of any nationality. Until 1920, a Tatar elementary school worked at the mosque. In 1920, believers were denied access to the mosque under the pretext of tax evasion.

“...During these years the fiercest struggle with religion was going on. In Vladikavkaz, almost all churches were destroyed. But when in 1934 the city council decided to destroy the Sunni Mosque, the commander of the 25th Tatar squadron of the 84th cavalry regiment Ya.I. Betkenev gave the order to the Tatars to guard the mosque with weapons in their hands. The new government had no choice but to concede and assign the status of an architectural monument to the mosque. However, everything related to religion in this building was consigned to oblivion. In the late thirties, an anti-religious museum was opened in the building of the Sunni Mosque.
Judging by the old photographs, an unsuccessful attempt was made to get rid of Islamic symbols and remove the spiers along with the crescents.

The restoration of the Sunni Mosque started in 1966 by a team of Leningrad restorers led by the artist A.N. Stupin. The restoration ended in 1969. Most likely, after the restoration, the crescents were returned to the spiers of the mosque. Later, a museum of nature was opened in it. And in the 90s, divine services were resumed here, and now the Mukhtarov Mosque is the only functioning Muslim temple in the city. Since 1996, the Sunni Mosque started to function again, it is a cathedral mosque and Muslims gather here at noon on Friday for communal prayer...” (M.Tkachenko oldvladikavkaz website)

“...The construction of the mosque began in 1900, after a long correspondence between the parishioners of the Muslim community and officials of various ranks. It was not easy to get permission to allocate the land and start the works. Ant it was even more difficult to find money for the construction. And here we encounter the first two riddles, of which there are many in the history of the Sunni Mosque: "Who paid for everything, and who built it?"
According to the first version, the "Tatar" one as local historians call it, only Tatars and 15 families of Kumyks responded to the call to collect money. Many sold their property, mortgaged houses. The Mufti of the Al-Sophia Mosque in Istanbul provided the project of the building, presented the Koran in gilded leather binding and sent his architect. Two years after the start of construction, both minarets and the dome were erected, but the crescent stocks and the sayings from the Koran on the walls were not gilded. There was not enough money. Then the delegation of the Tatars went to the Baku millionaire Murtuza Mukhtarov. He promised to pay for the work, but wished to give the mosque the name of his wife, the Orthodox Liza Tuganova, and the Tatars could not accept such a condition...

However, a special report from the North Ossetian Center for Social Research reads: “Experts from the Institute of Architecture and Art of the Russian Academy of Sciences have established that the building was erected by a Russian architect, Pole by origin, Joseph Ploshko, who was the author of the project. And he made this project by order of Murtuza Mukhtarov, with whom he collaborated more than once. The building was conceived in the Arabian style, reminiscent of the Cairo mosques of the X-XII centuries and even the famous Al-Azhar."

There is another version of the appearance of this mosque in Vladikavkaz. According to it, the construction was organized by the mullah of the Tatar community of the city, and the funds were collected not only by the Sunnis of the city. Donations were made in the Penza region and in the Kazan province, in the places of residence of the Tatars in Russia. Donation logs were kept until 1942. However, there was still an agreement with Mukhtarov on financial assistance. There was enough money for the construction of the mosque itself, but it was not enough for the planned madrasah and ablution room. Then they turned to the oil industrialist for help. A delegation of six people went to him and reached an agreement. Some time passed, one day the Sunni Muslims of Vladikavkaz were called to the state bank – 20 kilograms of gold have come. They gladly come to receive it. On the spot, they learn about a number of conditions under which this gold is transferred. Among other things, it was listed to name the mosque after Liza Tuganova. The Tatars considered that this condition was contrary to the principles of their religion and refused to receive the gold. It lay in the bank for six months. The madrasah and the ablution room were never built. But in the end, Mukhtarov's gold was still rescued from the bank. This was done by another community of Muslims, who built a third mosque - on the right bank of the Terek, in front of the current Krasnogvardeisky bridge. It, allegedly, was the Sunni mosque named after Liza Tuganova. It was destroyed by the artillery of the Denikinites in the battles during the Civil War. According to this version, the project of the mosque in the late Ottoman style was chosen in Istanbul, from there an Austrian architect and an Arab ornamentalist came to Vladikavkaz...” (M.Tkachenko oldvladikavkaz website)

During the Soviet period, a Foucault pendulum was suspended from the dome inside the building, experimentally demonstrating the daily rotation of the Earth.